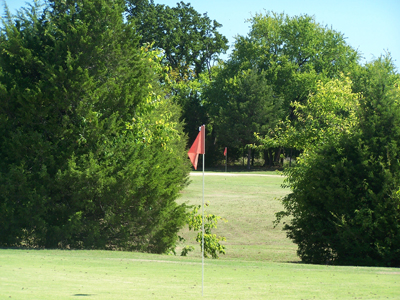 The Eccentric Duffer golf course is the brainchild of Ken Hobbs. Walking the property one day, he decided it would make a lovely golf course. Then Elizabeth spoke those fateful words, "Get after it!" It took 1½ years for the two of them to build the initial course. Family members helped, including the youngest grandchild and Elizabeth's 80+ mother. It opened to temporary greens and people came. The bermuda grass greens are unique in Ada, Oklahoma, but suit the course. Although it is not an easy course to play, it is not so difficult that beginners are intimidated, and is a great place to work on the short game. The course is unusual in a number of ways, not the least of which is the fact that it originally had 10 complete greens. When expanding the #7 fairway, the 85 yard green was left for those who are short on time or just don't want to play the long hole. Not only does a large pond and numerous trees come into play on more than one hole, but two holes are "blind" holes with their greens tucked back into trees or behind a tree-lined pond.

In 1997, Golf for Women magazine chose the course as one of its Top 15 Fairways in the United States. It was listed at No. 15 (and came as a real, very pleasant shock to the owners) and golfers came from several foreign countries as well as from throughout the United States to see how this little, new course could possibly meet the criteria for such a prestigious list.

A driving range was opened on additional property in early 2000. It, too, is unique in that it is downhill so that you can see your ball for the entire flight. 12,000 watts of light allow night practice on specified nights. A canopy was added in 2004, providing shade without interference, but was destroyed in 65 mph winds on June 4, 2005.

In 2008, the course was changed and extended. There are now four 4-par holes, all of them being a challenge to the experienced golfer while not too intimidating for the beginner. An additional tee box was added to No. 1, giving golfers the option of playing it as a 3-par or as a 4-par hole. Hole No. 6 changed direction and became a very challenging 4-par hole. No. 7 was routed so that it is across the large pond on the property. With trees and a sharp dog-leg, this par-4 hole has been a conversational topic as many of the golfers hit the wrong way on the hole. No. 8 was changed and reverted to an uphill, dog-leg left 3-par hole. 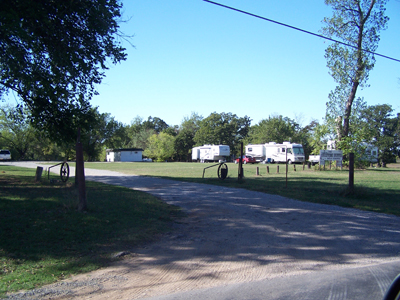 RV hookups were added during the summer of 2000. There are currently four full hooks and one with electricity and water. Visitors using the hookups report that the quietness, serenity and country atmosphere (and of course the golf facilities) make for a wonderful stay. (Rates are very reasonable.) Visitors are welcomed by both Ken and Elizabeth. In 2007, an additional three hookups were added to accomodate monthly or longer RV parking. They are located in a separate area away from the original hookups and provide easy access while not infringing on the golfers.

The Eccentric Duffer has always been community oriented. All tournaments have benefited some charity, church, foundation or youth program. No rental clubs are available, but "loaner" clubs will get you around the course. Not only are there right-handed clubs for loan, but there are also ladies' clubs and left-handed clubs.

The Eccentric Duffer hosted Phi Kappa Tau's annual tournament from its inception. through 2011.  The Duffer has assisted in fundraising for leukemia, diabetes, and individual memorial scholarship foundations.

Visitors from Russia, Germany, New Zealand, Australia, Japan, Mexico, Canada, Africa, England, Switzerland and Sweden have enjoyed the course as well as visitors from nearly every state in the U.S.

The Eccentric Duffer is available for Class Reunions and has hosted four in the past few years. There is a grassy area perfect for a large tent and electrical outlets allow speaker setups. In 2011, the area was the site of a lovely  night wedding reception.

Night Golf is a favorite or area residents and takes place AFTER dark several times each year. Information regarding dates and times is located elsewhere in the website.